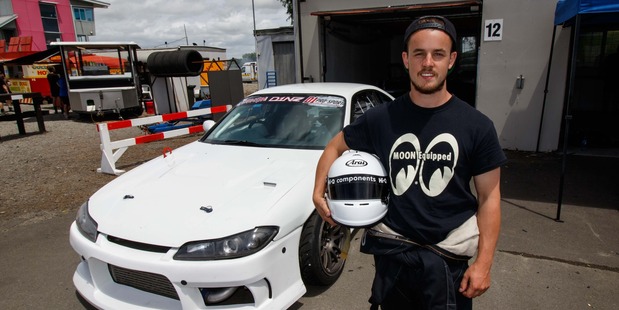 Matt Higham stands in front of his Nissan Silvia S15 after breaking into the top-16. Photo / Supplied

Matt Higham is the latest racer to make the switch from circuit racing to the sideways theatre of the Demon Energy D1NZ National Drifting Championship.

This year the Auckland drifter is taking on a full campaign in the D1NZ Pro-Sport Series. The class serves as the feeder category to the Pro Series, which is the pinnacle of New Zealand drifting competition.

“It’s always good to try different styles and get a bit of versatility in your driving-it’s been a fun transition,” Higham said.

“It’s a good friendly environment with good competition where the drivers help each other out. D1NZ is a much more low-key and enjoyable place with a lot less pressure.”

Like many aspiring circuit racers Higham began his racing career in karting. He followed the beaten track to Formula First and then into Formula Ford before making a few fleeting appearances in the now defunct V8 Challenge Cup.

Higham said he became disillusioned in circuit racing, but his passion for Japanese drifting culture pushed him to carry on his motor racing ambition.

“I’ve always had a passion for Silvia’s, which spurred on my interest in drifting and the Japanese sort of style.

“I was slowly beginning to lose interest in circuit racing, but I was also doing a bit of crewing for D1 at the time-it all sort of grew from there.”

However, Higham said the sport needs a shift in perception so circuit racers and fans alike understand what drifting in New Zealand is about.

“When you look at how well Shane van Gisbergen has done it’s credible and it’s a good reference to know that he’s done it. It’s disappointing in my eyes that it is regarded as an ‘other’ sport. There’s a lot of skill involved and it did open my eyes coming across.

“The car preparation and quality of the fabrication and just the general workmanship on them is pushed to the side and regarded as second rate. But there are some incredible cars parked up and some equally incredible driving.

“Hopefully it starts to stand out a bit more and be recognised amongst the circuit racing guys.”

Higham believed Pro-Sport is the perfect proving ground for racers from any motor racing code. With the development series often oversubscribed, he said it can only help to serve the Pro Series as more drifters develop their race craft.

“If you want to test yourself amongst a really good field then 40 guys in Pro-Sport is a pretty good field to compare your skills. It can only do good things for Pro in a few years’ time with new guys from Pro-Sport feeding through eventually.

“I’ve got a lot to learn and a lot of knowledge to gain in Pro-Sport. I’d like to start doing better in the next year or two and then from there we’ll see where we are and start looking for sponsorship to see if we put a plan together.”